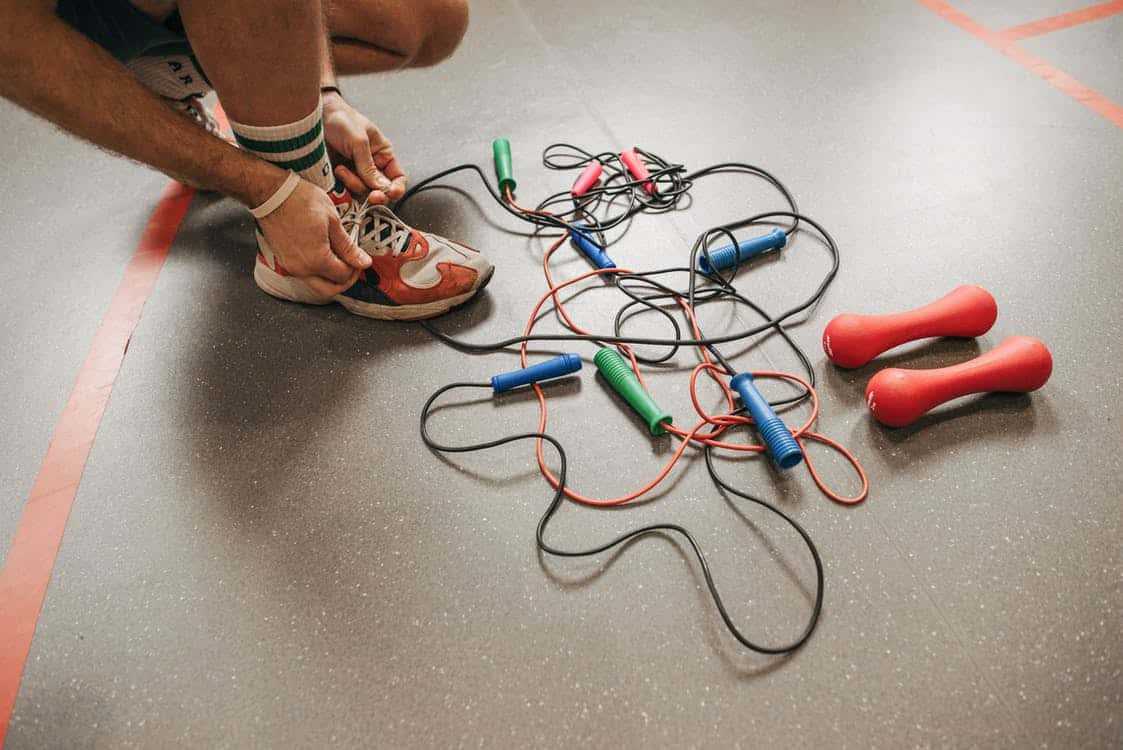 Jump Ropes are an integral exercise regimen for many. They’re great for cardiovascular health, help get an amazing workout in, and are generally extremely fun to do. Plus, they can be done anywhere. With the advent of smartwatches though, we’ve been getting used to track all of our fitness-related endeavors on our smartwatches.

So, with that said, can a smartwatch accurately track a jump rope session? If so, what are the best smartwatches for counting jump rope? Well, we’ve jumped around a few strides to let you know of our best picks and to help you answer this burning question.

No, not every smartwatch can count jump ropes. However, there are a slight few who can through their official applications while some can track jump ropes if you end up resorting to third-party applications.

Here’s a quick look at all the smartwatch brands that currently support jump rope tracking:

Since there are only 5 brands as of yet that can track jump ropes, we’ll be taking a look at our favorite picks for the best smartwatches that count jump ropes from each particular brand.

The Amazfit T-REX Pro is one of the most rugged smartwatches we’ve seen produced by the brand to date. If you’ve ever been a fan of G-Shock watches from Casio, you’ll feel right at home with the T-REX Pro.

Besides just having excellent fitness tracking capabilities, it has an extremely durable, well-built design that complements the entire aesthetic of the watch rather elegantly. Besides that, it is one of the only smartwatches to have 10ATM swim proofing alongside shock and water resistance baked into it as well.

All in all, the AMOLED screen is quite fantastic and looks pleasing. We were quite pleasantly surprised with the 18-day battery life, especially with all the bells and whistles the watch has. However, it was a step down from the previous model, the Amazfit T-Rex.

Ah yes, this is where the T-REX Pro truly excelled amongst the competition when it came to counting jump ropes. For starters, it has an excellent dedicated jumping rope tracker that picks up everything from your jumps, to your heart rate, and the calories you’ve consumed in the process.

It even goes a few steps beyond by taking into account your anaerobic and aerobic exercise rates and presents you with great detail about your entire jump rope workout throughout the entire process. All in all, if you only care about jump rope counting performance and how it tracks your workout, the Amazfit T-Rex Pro is an absolute no-brainer.

The Huawei Band 6 is an affordable fitness tracker that’s meant for the masses. However, don’t let the premise of a low price fool you into thinking this is an ordinary gadget. In fact, it is anything but.

The Huawei Band 6 is one of the most complete fitness trackers we’ve seen to date. With the ability to track over 96 different workouts, and have complete sleep tracking amongst the ability to measure your SpO2 at all times among other nifty features, we’re big fans of the Band 6.

Plus, while the display lacks in terms of size, it more than makes up for it in terms of resolution. Yes, this isn’t an FHD display by any sense of the word. But, the AMOLED display is bright, crisp, and clear. Moreover, the battery life is great – with the band lasting about a week on a single charge.

Huawei too, just like the Amazfit, has a native application for tracking your jump rope workouts. And, needless to say, we were quite surprised by the overall performance. In fact, the Huawei Band 6 actually has more information indicators compared to the Amazfit.

For example, we were able to find out how many times we’ve tripped during our hefty workouts sessions and the Watch was smart enough to identify those metrics by using neat little algorithms baked inside. Moreover, the calories burned out are relatively accurate as well.

Moreover, while this may be more inclined towards personal preference, we actually found Huawei’s UI in terms of displaying data to be a lot more sleek and cohesive which was definitely an added bonus.

The Garmin Fenix 6 / 6S is made for the fitness conscious. Featuring a durable design vouched by those at Garmin, you are purchasing one of the best fitness watches in the entire industry both in terms of features and overall build quality with the Fenix.

With that said though, the watch has average battery life, has a water resistance of about 10 ATM, has all the fitness features you could dream of, and provides you with access to GPS alongside the ability to keep yourself connected with the brand’s stellar repute of having great signal strength.

Besides that, we’ve had no qualms with the display, it gets the job done and is bright enough for a morning walk. The watch is definitely on the heavier end, but, to be fair; what else were you expecting from such a durable package?

After getting the application set up, we found the UI fairly basic. But, it covered most of the nuances quite well. Yes, it wasn’t as accurate as of the Huawei or the Amazfit for that matter. But, it did get the job done. However, it lacked the oomph we expected especially from an enthusiast-grade device.

With that said, you can’t really blame the developers of the application for not being accurate enough. All in all, it still remains a third-party application. Which, while great, isn’t comparable to the official options we’ve mentioned.

You can’t go wrong with the Apple Watch Series 7 if you have an iPhone period. The latest and greatest from the trillion-dollar company, the Series 7 features a display 20% larger than its predecessor and comes equipped with a better processor and more durable casing.

Besides that, it’s a complete package. With a below-average battery life that we’re always going to complain about, there’s not much else that’s left in terms of negativity. Apple has seemingly perfected the formula of a smartwatch and with their years of experience in the field, they’ve done a stellar job at implementing it.

It also has robust software updates that help the watch last for longer, great feature improvements, and the amalgamation of a lovely ecosystem with a plethora of fitness features turns the Series 7 into one of the best smartwatches ever made.

Quite surprisingly, even the Apple Watch does not have an official jump rope counter. With that, you are presented with two options. You can either forget all the detailed stats you’d expect from an official workaround and just use the simple Workout feature instead.

With it, you’ll gain a semi-accurate estimate of the number of calories you’ve burnt and how long you’ve been working out for. That’s pretty much it. On the other hand, you can also get the YaoYao Jump Rope application for the Apple Watch.

The application, while not that well-made does get the job done in most instances. It lets you know your speed, and the number of jumps you’ve done and is relatively accurate in letting you know if you’ve tripped.

Cool Things You Can Do With Apple Watch

The Galaxy Watch 4 is Samsung’s entry into the Google ecosystem. Finally ditching the much dreaded Tizen OS, we are met with a watch that’s both functional, and ergonomic with an array of sensors that can put almost any other smartwatch to shame.

With highly accurate tracking, great battery life of about a week or so with an amazing AMOLED display, the Watch 4 is one of the best smartwatches you can get for your Android device, and rightfully so.

Samsung’s round-faced design is iconic, the UI is sleek and super quick. Plus, even though Samsung phones do work better out of the box with the Watch 4, you won’t find any major differences except the lack of Samsung Pay with any other smartphone too. 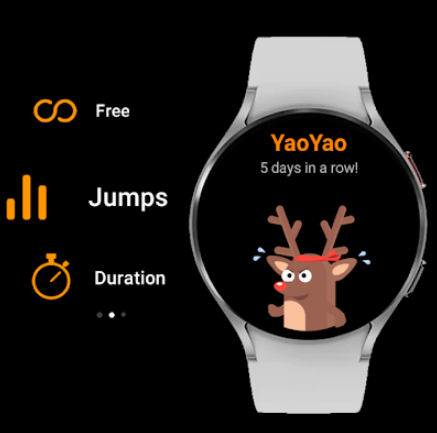 Third-Party applications make a comeback here once again with YaoYao – Jump Rope, the same app we used for the Apple Watch being ported for WearOS too. You’ll be left with the same number of options, the ability to track your jumps, trips, calories burnt and your total time working out.

Moreover, you will also be able to export/view your data on various health applications including Google Fit. Besides that, there’s not much to it. In terms of accuracy, expect the same results as you would think you’d get from a third-party application. They aren’t bad by any stretch of the imagination. But, your jaw won’t be dropping anytime soon.

How To Measure Body Composition On Samsung Galaxy Watch 4

Why Is The Amazfit T-REX PRO Better Than The Huawei Band 6 At Jump Rope Counting?

To be fair, the Huawei Band 6 does feature great jump rope workout tracking. In fact, it is arguably better. However, one key takeaway that differentiated between the two smart wearables is the screen size.

The Huawei Band 6, for all intents and purposes, is a small fitness tracker that while powerful, doesn’t really compare to the complete package the T-REX Pro provides. So, since the Amazfit is more of an all-rounder, we found it to be a better pick.

For some reason, renowned brands like Samsung and Apple have still not incorporated jump rope counting into their devices. If you aren’t a fan of third-party applications, then either the Huawei or Amazfit are your only options.

However, if you are in the mood for a bit more leeway, then any watch with WearOS, Garmin’s IQ Connect or Apple’s watchOS should do the trick just fine. Happy jumping!

You can manually log any exercise including Jump Ropes on your Fitbit. However, they will not be accounted for automatically. So, you will need to head to your Dashboard and track the entire workout manually.

Moreover, you also won’t be able to add more specific stats like the number of calories because the watch has no ability to detect your ongoing jump rope exercise as an actual workout unless you go for a manual addition.

Does Jump Roping Count As Steps?

No, jump roping does not count as steps. Jump roping will be considered a workout and while your calories and other workout data will be added, your jumps will not be considered as steps in any way or form.
This remains true on all platforms. While the Amazfit is more comprehensive in displaying your jumps when taking a look at overall stats, others like the Apple Watch and Huawei tend to just ignore all of that unless you get into detailed metrics.