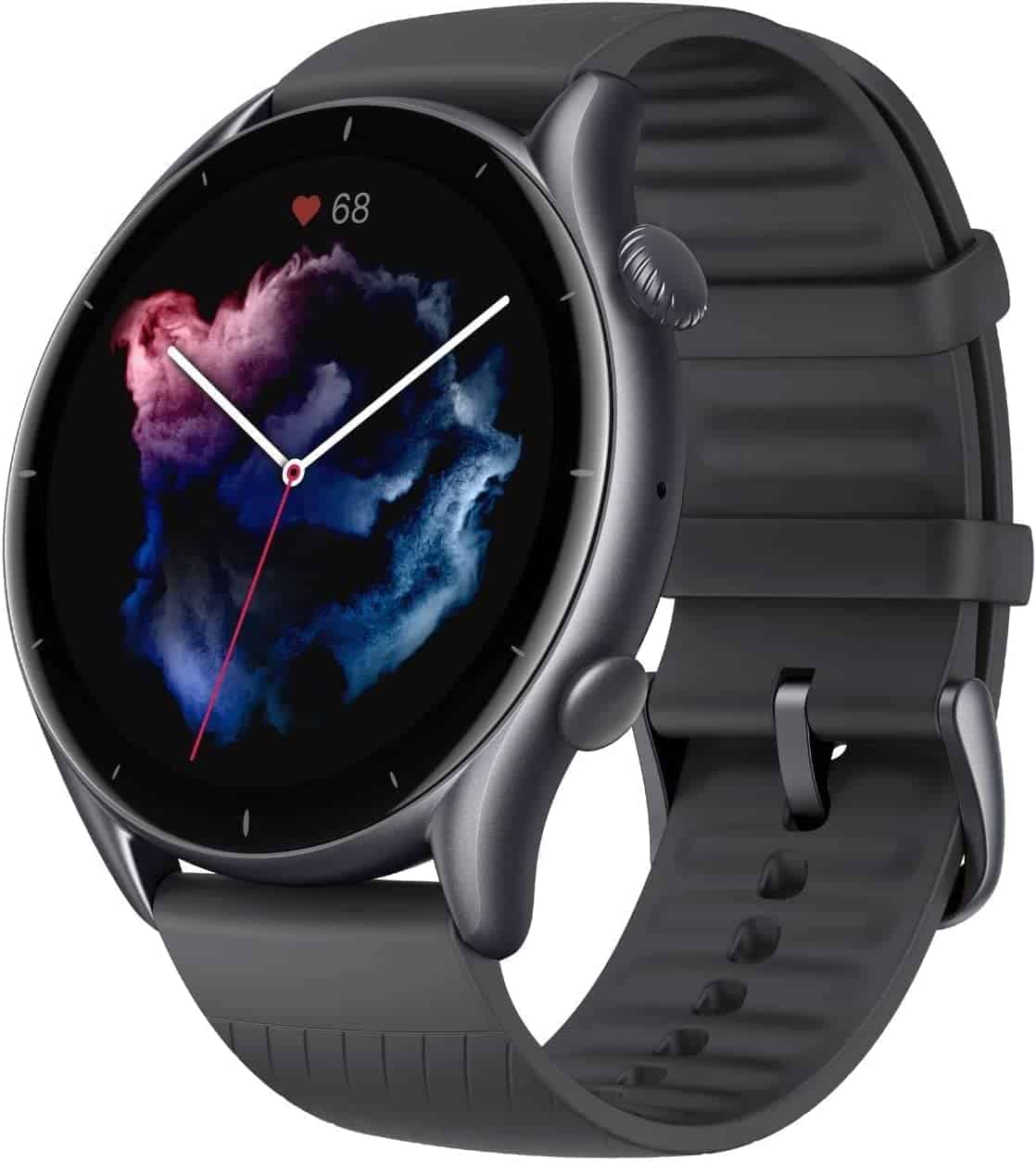 The Amazfit GTR 3 is a true successor to the GTR 2. Coupled with a better display, better battery life, and a faster SoC, the GTR 3 aims to take the crown as one of the best smartwatches you can buy for under $200.

The watch features GPS, a wide variety of different workout modes and the fitness tracking is great enough to let you skim through the day with ease. Sleep tracking is quite versatile, and the battery life of about eight days is amazing compared to other watches within its bracket.

With that said, we put the watch through its paces, and with rigorous testing, here’s our review of the Amazfit GTR 3! 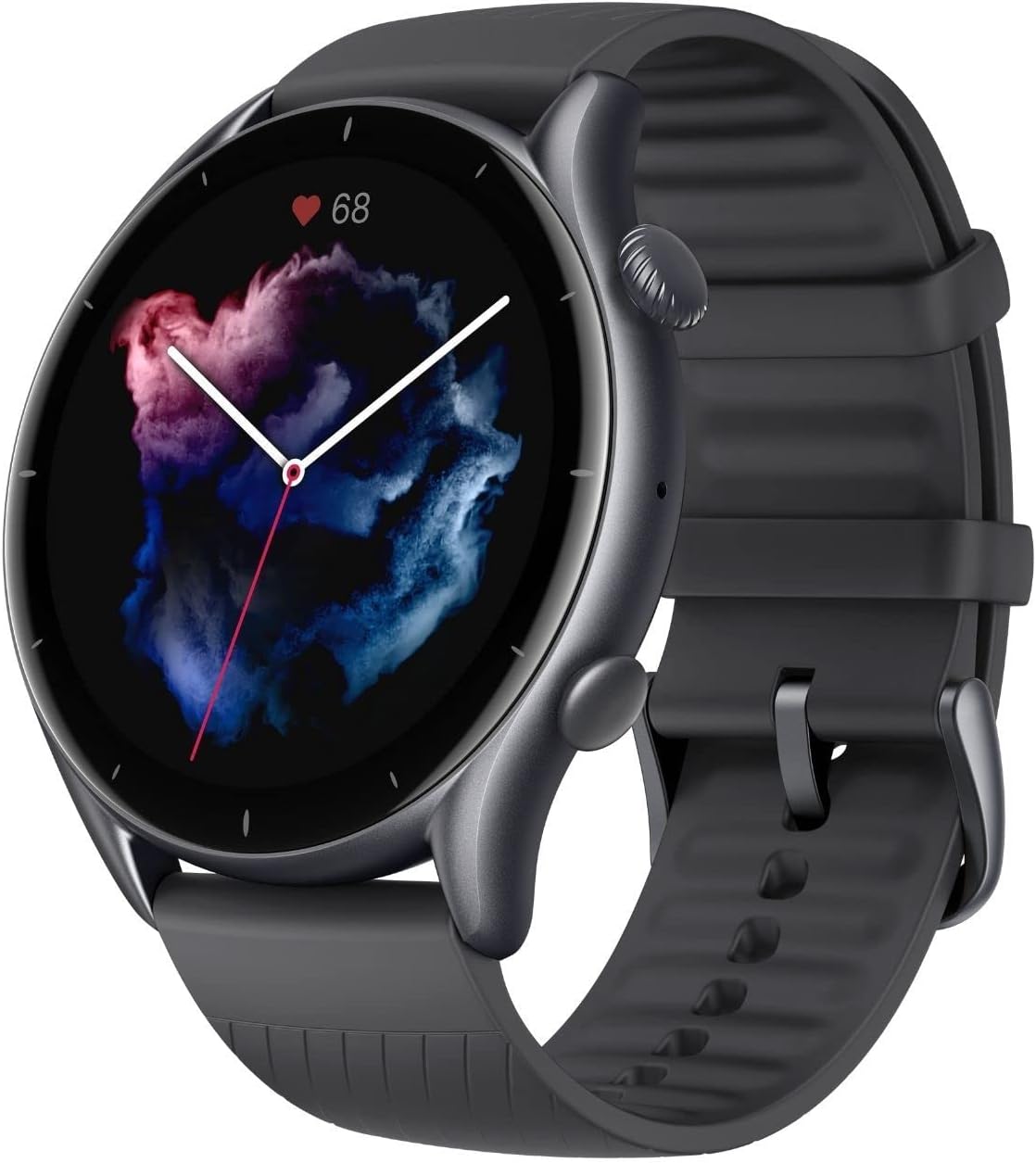 The Amazfit GTR 3 isn’t an accurate fitness tracker. It’s not highly inaccurate, but it is not meant to be used by athletes and professionals either. For a casual user like me, it is great. Why is that? Well, it allows for tracking over 150 workouts with different workouts.

And most importantly, it has made working out fun. This is because of the PAI (Personal Activity Intelligence) metric. This score is given to you on a weekly basis, primarily on your physical activity. If you keep a score over 100, you are considered to be actively improving your health and lifestyle.

In terms of overall tracking, the watch was fine. It had a step difference of about ~10% from my Apple Watch Series 7, and the GPS was fairly reliable in urban areas. However, the sensors could definitely use an improvement. But, at this price range, it is hard to complain about them.

Okay, so the Amazfit GTR 3 does not have access to Google Maps as of writing this review. You can set up a route on your phone and have the notifications relayed to your watch. However, you can’t independently open Google Maps and set up a route that you’d like to go to and see the route directly on the watch.

Don’t get us wrong, the Amazfit GTR 3 does have GPS. It is just that for now, we don’t see the feature being very useful when it comes to day-to-day navigation.

Battery life is somewhat of a mixed bag for the Amazfit GTR 3. The manufacturer, claims over 21 days of battery life. This figure is achievable, given that you turn off the Always On Display, reduce the frequency of your notifications and keep the smart mostly out of your watch.

However, for most, the watch will last about a week or so. As you’d imagine, this is quite a respectable figure compared to an Apple Watch or the Samsung Galaxy Watch. It is primarily due to the aforementioned custom OS that the watch is able to pull through with solid battery life. The charger present inside the box fills the GTR 3 up to 100% in 2 hours.

The Amazfit GTR 3 does come in with a microphone. But, it does not have a speaker. So, you cannot make or receive calls with the smartwatch. Although, there is support for call notifications which is something.

The Amazfit GTR 3 does not have emergency fall detection, neither does it have cellular to support SOS calls and it can’t detect an abnormal sinus rhythm. So, it virtually has no emergency feature that other competitors have.

The Amazfit GTR 3 uses the Music application for all sorts of media control. As soon as you play a track either locally or using your phone, all the required information, including the name of the song and its current time, is displayed.

You can then either play, pause, or skip using the on-screen touch screen controls. One qualm we had with the media control, though, was the fact that there was no easy way to scrub through songs.

The Amazfit GTR 3 has a thriving watch face ecosystem that seems to be growing every day. With a wide variety of watch faces to choose from and endless new ones coming, I was able to pick a watch face that truly stood out to me. Besides that, numerous complications can be added to the watch face to truly suit your needs.

The haptics on the Amazfit GTR 3 is good enough. They did end up waking me up but took a bit longer than a Samsung Galaxy Watch 4 or an Apple Watch. Plus, the fact that the haptics felt a bit coarse led to a less than blissful experience as we’d rather be wakened up gently.

Home automation is a big miss on the Amazfit GTR 3. Since it runs a proprietary OS, most appliances aren’t compatible out of the box. And, since it doesn’t support the greater ecosystem, you can’t locally control most devices.

Then, comes the saving grace, Amazon Alexa. Since virtually every smart home appliance supports Alexa, you’ll be able to turn on your living room lights and navigate your house with relative ease using the smart assistant.

What’s In The Box?

Note: If you have a USB-C powered charger, you will need an adapter to charge your watch. Bummer.

The Amazfit GTR 3, while a budget watch, still contains an exciting array of features that are both useful and add to the overall value a watch at this particular price bracket provides. 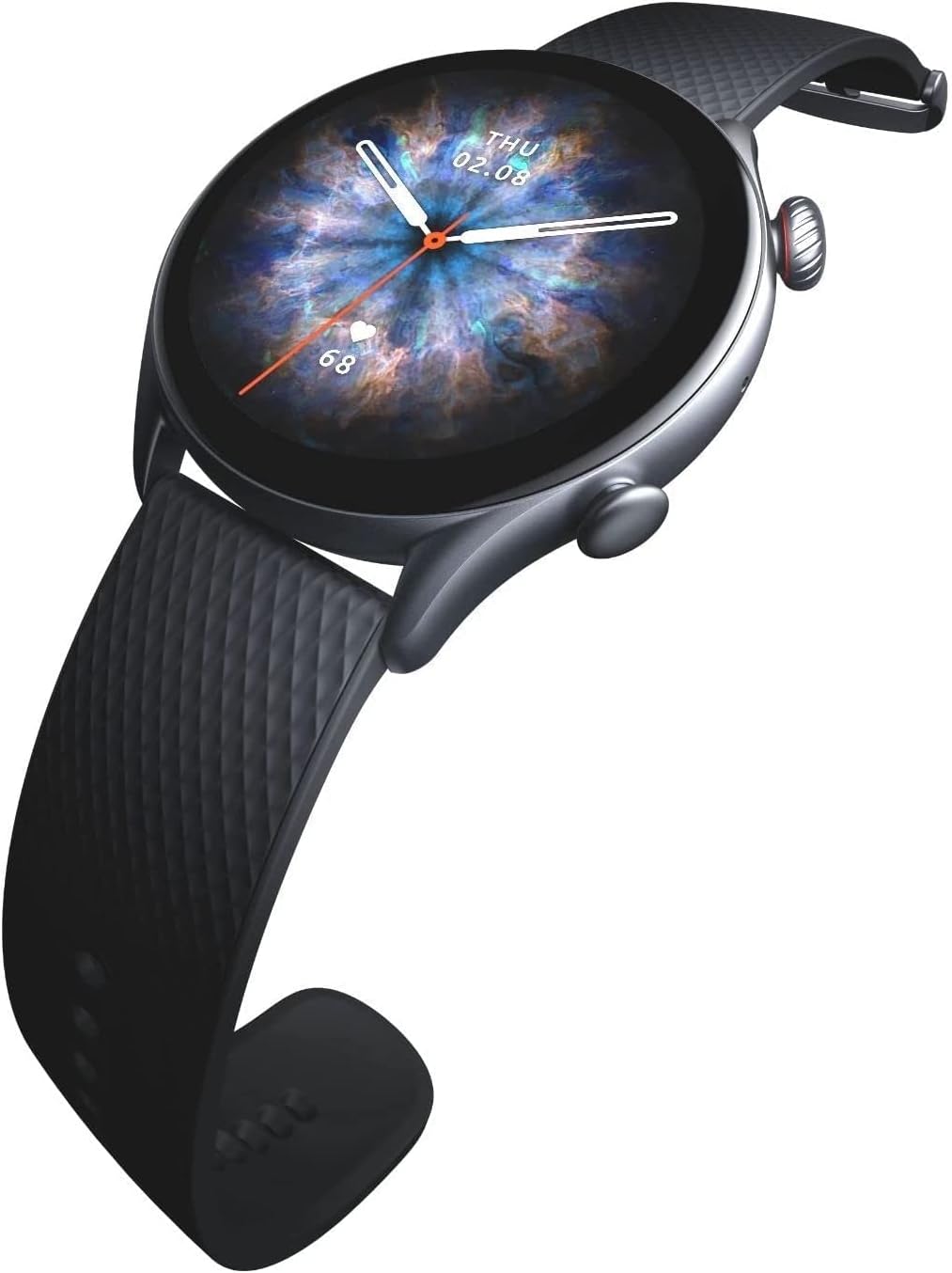 Personally speaking, even though there are very real advantages of owning a GTR 3 Pro, we’d still recommend the GTR 3. This is because most tend to not need a temperature sensor, making calls is easier on your phone, and, the increase in resolution is not that noticeable. 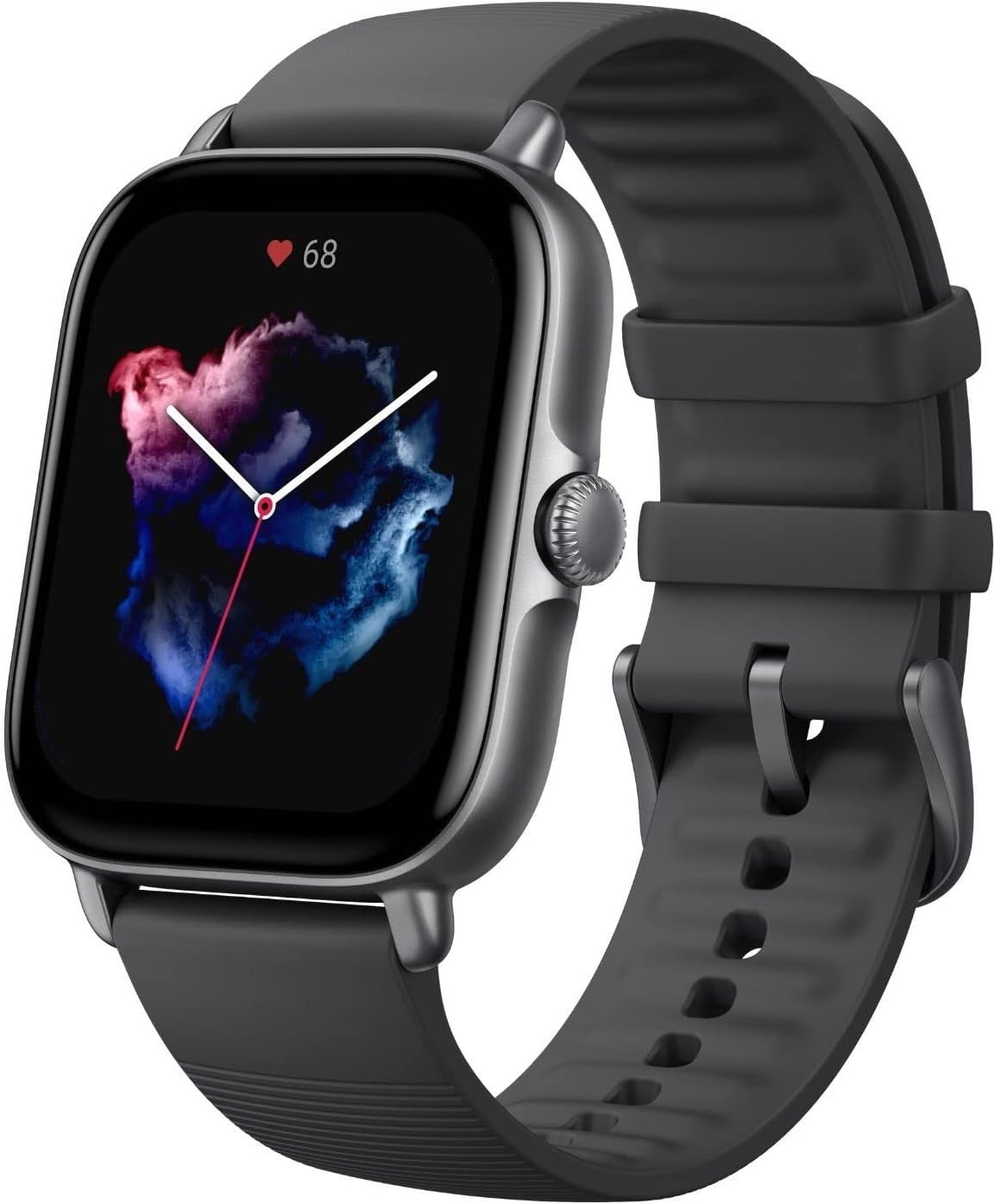 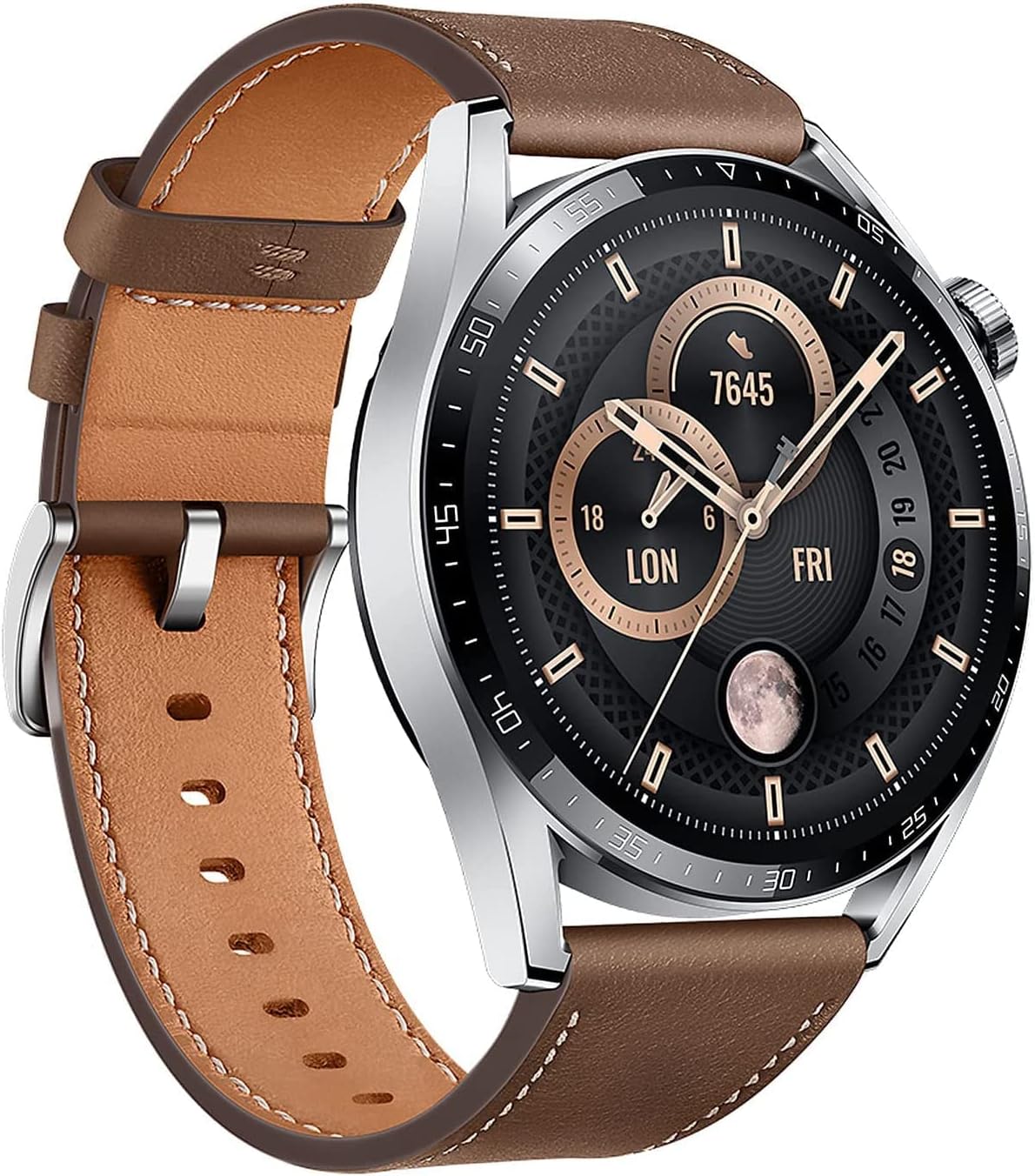 The Amazfit GTR 3 and Amazfit GTS 3 may look different thanks to them having a rounded and rectangular design respectively. But, under the hoot, they’re pretty much identical. With only a slight difference in screen size, with the GTS 3 having a higher resolution, all sensors are exactly the same and have the same specifications.

So, the purchase decision between these two devices is entirely dependent on what aesthetic you like more. One point to note, though, is the GTR 3 has double battery life compared to the GTS 3.

The Amazfit GTR 3 and Huawei Watch GT 3 are excellent watches, and both have the same design philosophy, with a few key differentiators along the way. We’re going to be talking about all of these so you can get a better overview:

Who Is The Amazfit GTR 3 For?

The Amazfit GTR 3 is for someone who is looking for an expensive smartwatch that looks good on your wrist, has great battery life, and has all the basic features one would expect from a smartwatch. It definitely isn’t the best in class at anything.

To define it better, it is a Jack of all trades but a master of none. And we are quite okay with that. So, if this is your first smartwatch, or you are in the mood for one for camping trips that you wouldn’t have to worry about charging constantly, the Amazfit GTR 3 is an excellent companion.

The Amazfit brand is known for providing great value-for-money smartwatches. They aren’t meant to be the most accurate, and neither are they known to be the best. If you want more features, go for an Apple Watch. And, if you want more accurate tracking, a Fitbit or Garmin are brands that you should look into.

What’s The Difference Between GTR 3 And GTS 3?

The GTR 3 has a rounded design, while the GTS 3 has a rectangular design. Besides that, the GTS 3 has a slightly better display but has half the battery life compared to the GTR 3. Both of these watches have the exact same internals.

Is Amazfit Compatible With iPhone / iOS?

Yes, the Amazfit is compatible with an iPhone / iOS. While it does not match the native level of integration an Apple Watch provides with an iPhone, it does get the job done in most cases.

Does Amazfit GTR 3 Have WiFi?

No, the Amazfit GTR 3 and the GTS 3 both do not have WiFi. However, the GTR 3 Pro has WiFi and can connect independently to your router.

Can The Amazfit GTR 3 Answer Calls?

No, the Amazfit GTR 3 and the GTS 3 both cannot answer calls. This is because they have a microphone but no internal speaker. On the other hand, the GTR 3 Pro has a speaker and can therefore answer calls when the watch is connected to your phone via Bluetooth.

I have been a devout fan of smartwatches and everything tech from the moment I laid my hands on them. From owning every genre of gadgets under the sun to writing about them - my passion for bringing the best ensures I bring out quality content, always.